Weed the People: The Future of Legal Marijuana in America

Product prices and availability are accurate as of the date/time indicated and are subject to change. Any price and availability information displayed on [relevant Amazon Site(s), as applicable] at the time of purchase will apply to the purchase of this product. 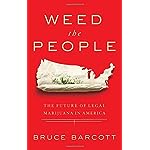 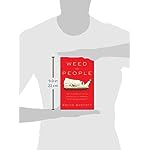 “Journalist Barcott (The Last Flight of the Scarlet Macaw: One Woman’s Fight to Save the World’s Most Beautiful Bird, 2008, etc.) goes on a long, strange trip to document the changing fortunes of Big Dope.Fortunes is the operative word: There’s plenty of money to be made in the marijuana business, and there are countless variations that can be found in the industry trade shows the author pops in on at various points in this engaging book. As he observes, it was the days of Richard Nixon that saw both a sharp upswing in prosecution for drug offenses and a loosening on the edges of various hemp-related crimes. Even in places such as North Carolina, not everyone bought Nixon’s call for the death penalty for dealers, and several states “passed laws that made the possession of small amounts of pot legal or, at worst, a minor infraction.” The pattern holds today: In Barcott’s two case studies of Washington state and Colorado, possession and use of pot are legal, and the federal-state divide looms very wide-even as the public perception of marijuana is radically changing, such that in 2013, 58 percent of the respondents to a Gallup poll favored legalization. No stranger to on-the-ground research, the author secured a medical marijuana card, and he takes readers on a grand tour of dispensaries, potions, tinctures” and his own blown mind: “When you absorb more than 40 years of messages about the horrors of marijuana, walking into a dispensary where it’s all on display, without shame or fear, can be an utterly disorienting experience.” Yet, silly title aside, Barcott’s book is entirely earnest. As the author notes, the feared explosion in crime has not happened in those test-case states, but its opposite has, while instances of racially based injustice and needless prosecutorial expenses have fallen dramatically. Will the rest of the country follow suit? To judge by Barcott’s useful book, you’d do well not to bet against it. – Kirkus Reviews

“Weed the People” did provide an engaging look at the flux we are undergoing today.” – Bellingham Herald/Bookmonger

“In engaging, well-reported vignettes, Barcott undergoes with the reader a kind of parallel self-education… By the end of his persuasive and surprisingly inspirational account, Barcott is again an occasional smoker who can separate his bourgeois habit from the unwashed hordes at Hempfest.” – Seattle Weekly

Bruce Barcott, a former Guggenheim Fellow in nonfiction, is a frequent contributor to The New York Times, Rolling Stone, National Geographic, The Atlantic Monthly, Outside magazine, and many other publications. The Last Flight of the Scarlet Macaw, his critically praised true story of a woman fighting a global corporation and a corrupt government to save the world’s most beautiful bird, was reviewed on the front cover The New York Times Book Review, and has been adopted as a “One Book” choice by a number of cities and colleges across the United States. His previous book, The Measure of a Mountain, earned the Washington State Governor’s Award.

He lives on an island near Seattle with his wife, the memoirist Claire Dederer, and their two children.

The legalization of marijuana is the next great reversal of history. Perhaps the most demonized substance in America, scientifically known as Cannabis sativa, simply a very fast growing herb, thrived underground as the nation’s most popular illegal drug. Now the tide has shifted: In 1996 California passed the nation’s first medical marijuana law, which allowed patients to grow it and use it with a doctor’s permission. By 2010, twenty states and the District of Columbia had adopted medical pot laws. In 2012 Colorado and Washington state passed ballot measures legalizing marijuana for adults age 21 and older. The magnitude of the change in America’s relationship to marijuana can’t be measured in only economic or social terms: There are deeper shifts going on here – cultural realignments, social adjustments, and financial adjustments. The place of marijuana in our lives is being rethought, reconsidered, and recalibrated. Four decades after Richard Nixon declared a War on Drugs, that long campaign has reached a point of exhaustion and failure. The era of its winding down has arrived. Weed the People will take readers a half-step into the future. The issues surrounding the legalization of pot vary from the trivial to the profound. There are new questions of social etiquette: Is one expected to offer a neighborly toke? If so, how? Is it cool to bring cannabis to a Super Bowl party? Yea or nay on the zoning permit for a marijuana shop two doors down from the Safeway? Plus, there are the inevitable conversations between parents and children over exactly what this adult experiment with marijuana means for them.

Specification: Weed the People: The Future of Legal Marijuana in America

There are no reviews yet.

Be the first to review “Weed the People: The Future of Legal Marijuana in America” Cancel reply

No more offers for this product!

There are no inquiries yet.

Added to wishlistRemoved from wishlist 0
0

The Education Portal on Health & Cannabis